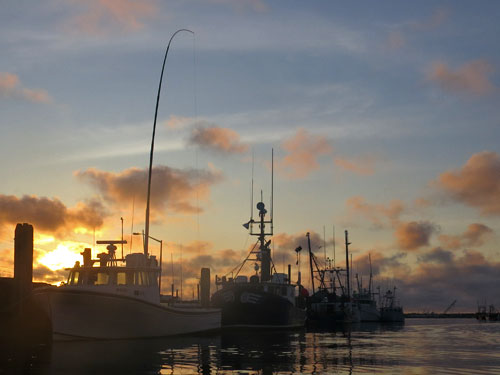 Ocean City, Maryland is primarily a tourist resort, with a population that swells from less than 10,000 winter residents to over 2 million in the summer months.

Ocean City Inlet did not exist until1933, when the Chesapeake Potomac Hurricane tore thru the narrow island, separating Ocean City from Assateague Island.

The Army Corps of Engineers stabilized the inlet, which provided Maryland with access to the Atlantic Ocean. Ocean City Inlet also allows smaller vessels to travel between the Atlantic and coastal bays.

Ocean City is also home to a number of longliners that fish for tuna, swordfish, and other pelagic species.

In the coastal bays, watermen fish for blue crabs, hard clams, and a variety of inshore fish.

Most commercial boats tie up in the West Ocean City harbor which is only minutes from the inlet. The harbor is home to Martin Fish Company, Southern Connection Seafood, mechanical shops, a Tow Boat US facility, launch ramps, and restaurants.