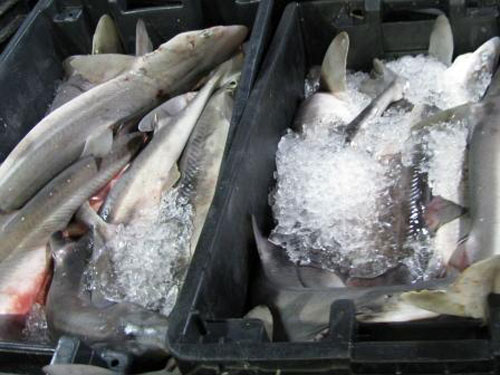 The spiny dogfish (Squalus acanthias) is found on both sides of Atlantic and Pacific Oceans. Dogfish are often abundant, traveling in packs, many of which number into the thousands. They live in both inshore and offshore in warm-temperate seas.

Dogfish have been known to occur from the ocean surface all the way down to the bottom, to depths of 2400 feet. They seasonally migrate along the coast of North America and have been recorded making transatlantic crossings.

Their primary diet includes sand eels, squid, butterfish, herring, menhaden, cod, haddock, pollock, mackerel, croakers and flatfish, however dogfish have been known to feed on almost every form of marine life in their territory.

Female dogfish give birth to litters of 1-20 live pups. The 8-10 inch pups are born with a full set of teeth that can be used to kill prey immediately after birth. Spiny dogfish are thought to live 30 to 100 years.

An early work, Fishes of the Gulf of Maine, (Bigelow, H.B. and W.C. Schroeder, 1953) described dogfish as “Voracious almost beyond belief, the dogfish entirely deserves its bad reputation. Not only does it harry and drive off mackerel, herring, and even fish as large as cod and haddock, but it destroys vast numbers of them.

Again and again fishermen have described packs of dogs dashing among schools of mackerel, and even attacking them within the seines, biting through the net, and releasing such of the catch as escapes them. At one time or another they prey on practically all species of Gulf of Maine fish smaller than themselves, and squid are also a regular article of diet whenever they are found”.