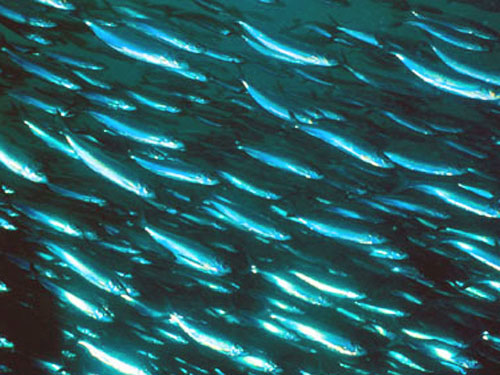 One of the world’s most abundant and important fish stocks, Atlantic herring are found on both sides of the North Atlantic.

In North America, Atlantic herring are found from the Gulf of St. Lawrence to North Carolina, from inshore waters out to the edge of the continental shelf.

Herring stocks support important fisheries in Canada and the USA. The species is also known as sea herring, kippers, and other common names.

Atlantic herring are used as bait in several commercial fisheries including American lobster, Jonah crab, and tuna. They are also processed for human consumption, usually canned, smoked, or pickled.

Canada’s major Atlantic herring fisheries are located off Nova Scotia and the Bay of Fundy, the southern Gulf of St Lawrence, and coasts of Newfoundland. Herring are harvested mainly with purse seines.

The U.S. Atlantic herring fishery operates from Maine to Cape Hatteras, North Carolina. The majority of catches occur in federal waters of the Gulf of Maine, between May and November.

The U.S. Atlantic herring fishery is jointly managed in state and federal waters by the Atlantic States Marine Fisheries Commission and NOAA Fisheries in conjunction with the New England Fishery Management Council.