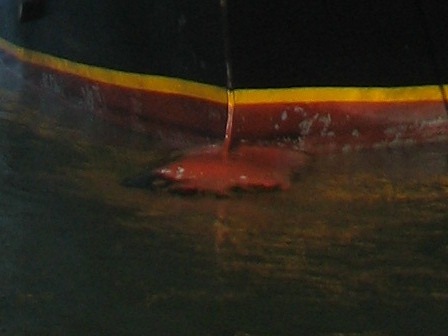 Displacement hulls push water aside as they move. The water that is pushed aside forms a wave that begins near the bow. The length of this wave is proportional to the speed of the hull through the water.

The bulbous bow creates it’s own wave that is farther forward and “out of phase” with the natural bow wave created by the hull, effectively subtracting from the normal bow wave and reducing it’s drag-inducing effect.

A bow bulb can be optimized for a specific speed (or a small range of speeds). A bow bulb providing the greatest potential for reduced fuel consumption is generally designed at a given speed.